We spent the morning having breakfast in the town square of Sant' Agnello, followed by a quick shopping excursion in Sorrento, since I wanted to purchase some small ceramic souvenirs.  We made it back to our suite just in time to be picked up by the taxi, which took us to the Sant' Agnello train station.  We were pleasantly surprised by a busking trio on the train (who were actually quite good)-- two accordions and saxophone.  We would later discover that busking on the train for money was pretty common, as we saw a few more people with accordions, none of whom were any good.  As Oliver said, these guys set the bar high!  But in any case, this made my morning:

We were also able to see the map of the trains again, and figure out that we must have been on the green line the other night, instead of the blue one... stranding us in Poggiomarino, instead of taking us to Sant' Agnello. 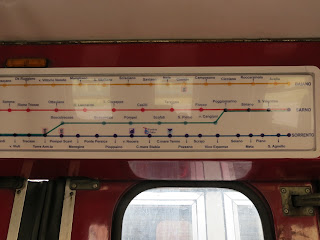 Anyway, we arrived in Rome again, no problem, and were able to find our hotel, which was just outside the centre core of town, near the lovely Villa Borghese Park.  After checking in to our hotel, and leaving all our baggage, we went out to explore the town, starting with a stroll through Villa Borghese...


Heading out into the city itself was kind of spectacular.  We could see over the rooftops and all the way to St. Peter's Basilica in the Vatican.  We had a small map from the hotel, with some of the main attractions in town listed, and we wandered through town.  We also randomly found a very interestingly-named store...

We walked through the Piazza Navona, which was bustling with tourists and small outdoor cafés trying to lure us for dinner... and on to the Pantheon, where we were able to step inside and have a look around.  There was even a cellist busking just outside-- he was quite good.

Finally, we stopped for dinner at a restaurant that was so busy we got the only free table left, at the very back... though it did have the best porcini mushrooms I've had in a while! 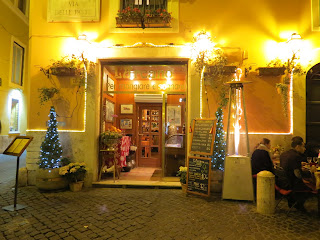 We continued on past the Fountain of Trevi (again, swarming with tourists, though quite impressive)... and the famous street intersection with the Four Fountains, before locating the Teatro dell' Opera.


Finally, we took the subway back to our hotel after a long and interesting day... tomorrow we are planning to visit the Vatican!