Today was a very long and busy day.  Oliver and I were up early to meet with Bujar at the Radio-Television headquarters, where we were ushered into the makeup room before going on set for our interview for the morning arts programme.  (We found out later that the woman interviewing us was the sister of the timpanist in RTSH).

Here is the link to a print interview (in Albanian):

Following the interview, we headed back over to the Academy of Arts, where Oliver had an hour to warm up before the dress rehearsal, and I went upstairs to give a short chat to the composition class.  There were about 7 students there; I showed them my two scores ('Tides' and 'Mosaic'), and together we listened to a recording of the second movement of 'Mosaic'-- courtesy of the Canadian Music Centre's online Centrestreams archive.  I also showed the class the CMC website, where I told them they could listen to Canadian music, and also request to borrow scores, which can be sent to anywhere in the world.  The students seemed quite interested, since due to Albania's political history-- the country being almost totally closed off from the world for much of the 20th Century, they are just now starting to discover things from the past few decades (Oliver's performance of Richard Strauss' 'Horn Concerto No. 1' would be a premiere in Albania, for example).

Albania has had very minimal exposure to North American composers especially, and I was told by a couple of people that I was only the second Canadian composer to have music performed in Albania (the first being Patrick Carrabré, in 2003, I think).  Trombonist and conductor Alain Trudel had apparently also been in the country a few years ago to conduct.  Anyway, the students seemed very interested, and I invited them to come hear the dress rehearsal later that morning, which was happening in the hall downstairs. 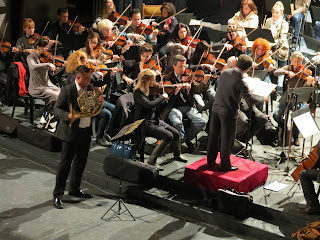 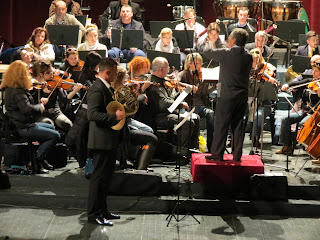 The dress rehearsal went well, though the hall was cold-- many of the string players were bundled up in thick coats!  Oliver told me afterwards it was difficult conditions, but to me it sounded wonderful.  I went up into the balcony level to get a better idea of the balance and blend, and I felt like I was really hearing my horn concerto, 'Mosaic' for the first time (i.e. the way I'd heard it in my head while composing).  I felt confident for a good performance that evening. 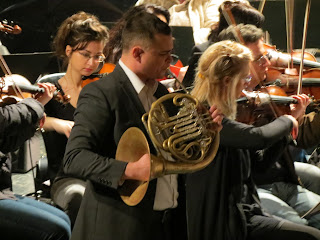 The performance was at 7pm in the hall of the Academy of Arts.  It was a pretty full house, and I happened to be sitting in the front row, right next to Steve-- a friend of Bujar's (and his first English teacher) who had joined us for part of our West Coast Symphony tour in Albania last year.  It was a coincidence, since he did not know about this concert beforehand, but definitely a nice one.  He came out to dinner with us after the concert. 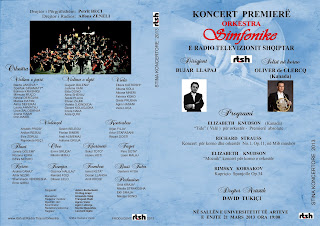 I did another short interview on stage before my piece, and the cameras were rolling.  The concert went really well.  The programme was: 'Tides' and R. Strauss' 'Horn Concerto No. 1', followed by intermission and then 'Mosaic', and Rimsky-Korsakov's 'Capriccio Espagnol'.  Many of the RTSH musicians talked to me backstage... I think they genuinely enjoyed playing my music-- especially 'Tides', which had been inspired by my trip to Albania last year, and contained some Balkan rhythms and elements.

After the show, we went out to dinner again at King House, with Bujar and a few friends and musicians to celebrate!  The raki flowed freely...


All in all, a very successful and enjoyable time!  I am honoured to have been part of this experience, and hope that in some small way I've helped make connections that will grow over time.  I wish all the best to everyone there who showed us a warm welcome, and especially to the musicians and young composers.  Tomorrow Oliver and I have a day off in Tirana, before we fly to Rome. 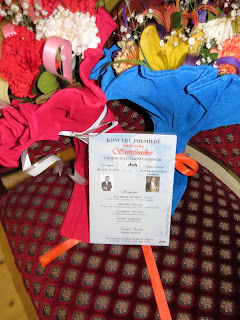