One of the longest days ever... a series of mishaps so comically horrible that it seemed like something from a movie.  We got up at 3:30am, and left the Livia Hotel in Tirana, Albania.  Our early morning flight to Rome was fine and uneventful-- it was after that that things started to go wrong.  Our plan was to take the train from Roma Centrale station to Napoli, but we accidentally boarded an earlier train leaving from the same track, which turned out to be a non-stop train ride to Milan!

(If anything, now I can say that I've seen Bologna, Firenze, Milan...)  We got off the train about 3 hours later, and went directly to the customer service desk, where we were kindly granted a free return trip to Napoli, after we'd explained our mistake!  We had to run to catch the train back, but we made it, and ended up in the business class carriage. 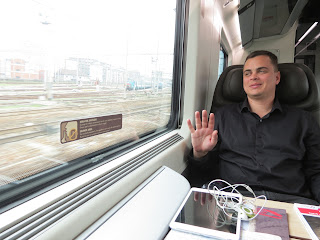 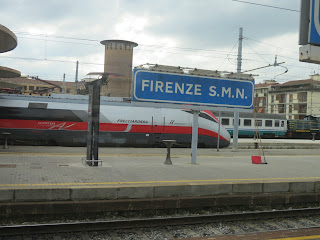 Oliver slept, while I watched a movie on his iPad.  A bottle of raki we'd received as a gift kept us company.  We finally arrived in Napoli Centrale at about 6pm.  From there, we transfered to the local train line, the Circumvesuviana.  We were finally headed towards the suite we'd rented in Sorrento, and couldn't wait to get there and settle in... little did we know that our adventures were just beginning!


We were on the local Circumvesuviana train for maybe about 45 minutes, counting down the stops from Napoli to Sant' Agnello, when suddenly everyone got off the train, and were telling us it was the last stop.  We were confused, since according to the map on the train, this was not the last stop.  There was one last train going in the opposite direction (little did we know that this would have been our last chance to connect to our stop that night), but we didn't take it, since it seemed to be going back towards Napoli, where we'd just come from.

Enter: the town of Poggiomarino.  This was definitely the lowest point in our trip.  We were supposed to get in touch with the owners of the suite we'd rented, to let them know what time we were expecting to check in so they could come over with the key, but I hadn't been able to use Oliver's iPad early that morning from the Livia Hotel, and we'd been on planes and trains all day since then.  So, we went into a few places around town (a coffee shop, a bar, and the train station itself) where I tried out my Italian by asking to use a phone.  At the coffee shop and the bar, I got a rude response and was told bluntly that there was no phone or taxi in town.  I should add too, that I had trouble understanding some of the people in this town, since they spoke in a different dialect.  Oliver was dependent on me, since he couldn't speak with the people there either.  I squeezed back tears of frustration.

Finally, an older woman at the train station had a cell phone, from which we were able to reach one of the brothers who owns the suite we'd rented.  He was very kind, and when I explained our situation, he sent a friend in a taxi to collect us at the station.  There literally were no taxis or public phones in this town!!  One of the people working at the station offered us a ride to another station (to connect to the Sant' Agnello train) after he finished work, but it seemed out of the way, and I was sort of getting a creepy vibe from him.  The taxi would be expensive, but seemed like a solid option.  By this time we were cold, exhausted, and I was reaching the point where everything was so bad it was starting to be funny... I couldn't imagine a weirder scenario, and everyone in this town seemed like a surreal, exaggerated character from a bad movie.

So, Oliver and I waited around in the town for another hour at least, before finally the taxi showed up.  It was such a relief to be driving along the coast towards Sorrento.  The road was narrow, crowded and wound along the cliffs... we were imagining what it must have looked like during the daytime.  Finally, we arrived at our place in Sorrento (Sant' Agnello), and it was gorgeous.  We would have the whole downstairs floor of a villa to ourselves for the next couple of days, with a patio and spectacular view over the Bay of Naples.  We ordered pizza, and curled up by the TV before going to bed.  It was not the day we'd hoped for, but we'd made it to Sorrento, and waking up to the view from our patio the next morning was so beautiful, it was impossible not to feel totally alive and caught up in the present moment.