It has been an amazing past two weeks!  We are safely back in Vancouver now, and I have just spent a day going through all the photos from our trip.  Since we didn't have any decent internet connection until the last couple of days of our trip, and I was also unable to load photos from my camera to Oliver's iPad, I'm going to be going backwards by writing the blog now... enjoy!

It's been a busy past couple of days.  The other day, we met for coffee and raki (traditional Albanian drink) with Maestro Bujar Llapaj, and also met the RTSH's principal horn, Andrea Canaj, and the orchestra manager.  We also enjoyed lunch with Bujar, which gave him and Oliver a chance to discuss the scores. 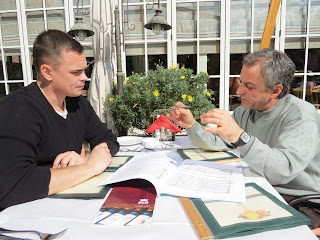 We've spent the last few mornings in rehearsal with the RTSH, and Oliver gave a horn masterclass at the Academy of Arts the other day. It sounds like I will be meeting with some of the composition students at the Academy tomorrow. 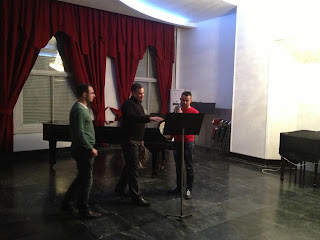 We were also invited to dinner with some of the RTSH brass players the other night, and enjoyed some typical Albanian food at the King House Restaurant.  Oliver has been busy practicing at the Academy in the evenings too, which gives me time to take a nap back at the hotel! 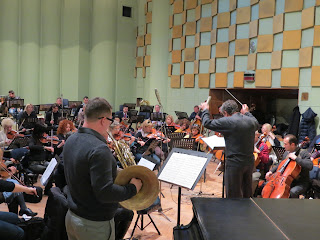 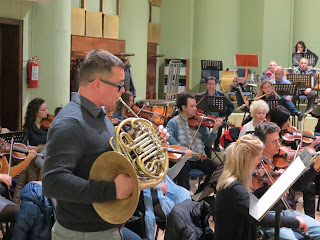 We've had some intense rain here (makes you realize how very uneven the sidewalks are), as well as some lovely spring weather, though it is still quite cool out, and a very different experience from visiting the city in early summer when it is around 40 C.  Yesterday afternoon we explored a bit around town, and saw some historical artifacts inside the National Art Gallery, which had been closed last summer when I was in Tirana.  Albania is much the same as I remember it from last year, but the park right near our hotel has been upgraded from a muddy hole to a nice grassy area with benches, a small playground, a working fountain, and some popcorn and balloon stands.  In general, the people here have been very open and friendly.  I think Oliver is starting to enjoy some of the quirks and randomness here, too...


Tomorrow morning, Oliver, Bujar and I have an 8:30am interview for a national TV show, followed by the dress rehearsal, and concert in the evening.  As far as I know, the concert will be recorded as well as televised nationally.  My two compositions ('Tides' and 'Mosaic') are coming together well with the orchestra, though some small adjustments have been made, since the orchestra does not currently have a harpist, or some of the standard percussion instruments (xylophone, vibraphone).

Oliver is back from practicing now, and we're headed off to dinner... until later, "mirupafshim!" (goodbye)!